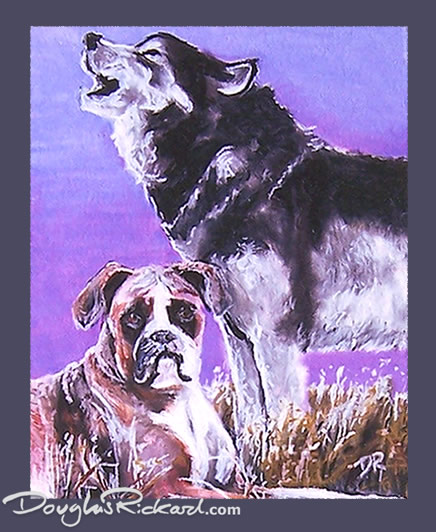 No.1 A conscious breeding of wolves.

There are several theories about the dog’s domestication process. One of them states that human was deliberate stealing wolf pups and did their conscious selection of mild individuals.

Undoubtedly, wolf skin and fur served nomadic tribes for clothes, and sometimes young puppies were taken away from the pack and eaten. However, this theory hold that some from the stolen puppies were left alive, as a toy dog for children, and those of them, who as adults didn’t become wild, were used further in breeding, crossing with other domesticated individuals (Miklosi, 2003). That’s probably what selection of wolves with a mild nature looked like. And over the time, animals with modify anatomical structure, behavior and genetics (Case, 2010). This theory was to support the experiences of a group of researchers led by Dmitry Konstantinovich Belyayev from the Institute of Cytology and Genetics in Novosibirsk in the ’60s.

No.2 About Belyayev research 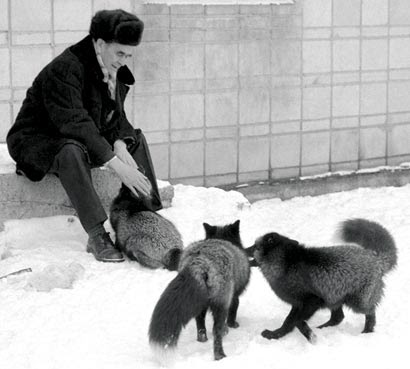 Dmitry Konstantinovich Belyayev and his foxes

Belyayev’s research work relied on breeding silver foxes, with the selection focused on mildness to people. Amazing results were obtained already in the 18th generation (and therefore only after 20 years of breeding), where foxes responding positively to humans, i.e. wagging their tails, and even whining at the sight of human. Phenotypic features have also been modified, which is a phenomenon characteristic of domesticated animals: individuals with white patched, with dropping ears and a shortened, slightly curved tail. The foxes also began to reproduce not once a year in the spring, but twice, which is a change typical for domesticated animals that in healthy conditions (here: human care, good nutrition) are more likely to produce offspring.

What’s more, Bielajew managed to domesticate, apart from foxes, also American minks and otters. Successful trials were also carry out on other mammals. In Siberia, for example, two centers of moose taming were established – one in the taiga on the Pechora river, and the other in Kostrow, where a dozen animals were tame and used: males to,i.a. for minerals searching, pulling a sled or carrying luggage in wetlands. The females, on the other hand, gave milk, which according to the Russians is the best medicine for children’s intestinal diseases. However, not all animals could be domesticate, e.g. unsuccessful were attempts to domesticate the zebras, which despite many years of efforts still remain wild (Frender-Majewska, 2009). 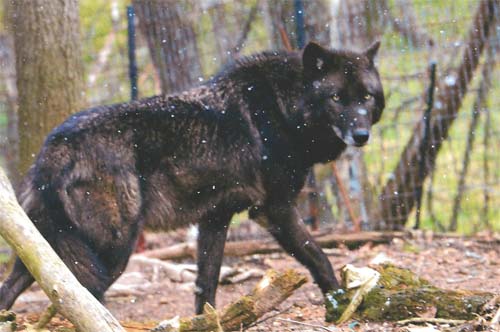 In contrast to the very optimistic results of research carry out on foxes by Bielajew are the research carry out by Gácsi et al. (2005) showing that it is not possible to completely tame a wolf. Not only is the domestic wolf don’t show many behaviors presented by domestic dogs, but also this domestication is not genetic inheritance – as a result, even a domesticated she-wolf give birth to a fully wild offspring. Thus, the truth and rightness of the above theory that a primitive human has deliberately stolen wolf puppies and breeding them concious, leading to the creation of a new subspecies, which is a domestic dog, are small.

It is assumed that natural or artificial selection, directed at specific features that are revealed at different times in the youthful period, may explain such a large variance of dog breeds in terms of their size, morphology and behavior. Most dog breeds have a more rounded jaw than the wolf and a larger angle between the facial and cranial regions (more pronounced forehead stop).

There is a division of the dog breeds into three groups, due to the type of skull:

Other parts of the dog’s body have also been modificated, such as ears (very long like cocker spaniels), tail (different length and way of carrying, e.g. curled and lying on the loins, like akita tail) or the type and color of the dog fur ( structure of human hair like yorkshire terrier has got or hair curly like poodle has got).

Genetic similarity of dogs and wolves

Genetic and embryological studies of the mitochondrial DNA of a domestic dog (Canis lupus f. Familiaris) and gray wolf (Canis lupus) showed a very large genetic similarity of these two species, because they share as much as 98.8% of genes (Vilà et al., 1999).

Moreover, larger mDNA differences occur between some dog breeds than between dogs and wolves (Case, 2010).

What’s more, between dogs and wolves there are smaller differences at the level of mDNA, than between human ethnic groups, classified as one species (Case, 2010)! 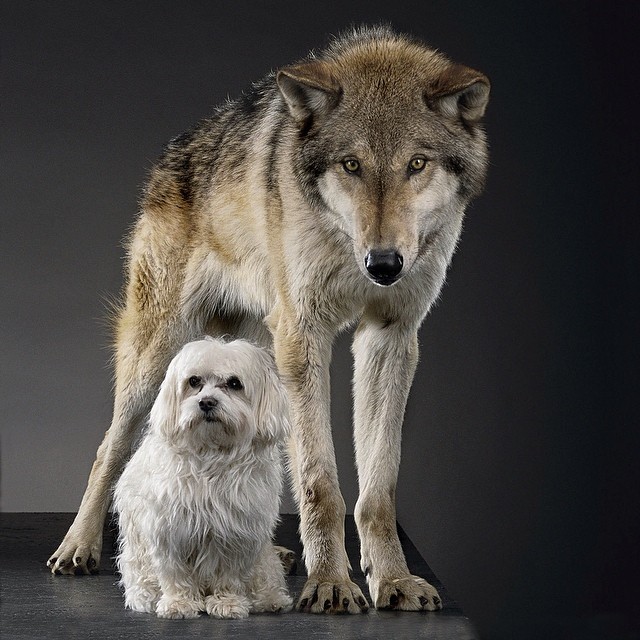 And it may seem that this is the ultimate argument for treating the dog as a “wolf at home”. Unfortunately, it’s not that easy.

Modern researchers emphasize that today’s wolf is not the direct ancestor of a dog, although these two species probably have a common ancestor (Horowitz, 2013, for: Dukowicz et al., 2015). Presumably it was so-called “village dog”, which was a pre-domesticated form of a domestic dog, reminiscent of local wild varieties of wolves to a large extent.

Although biologists and ecologists agree on the close genetic relationship between dog and wolf, there is no doubt that the dog, wolf, coyote or jackal have adapted to live in completely different environmental conditions, so they should be classified and treated as completely different species ( Case, 2010).

In conclusion, neoteny resulting from the domestication or stopping the growth of the dog during the metamorphosis, and perhaps both of these phenomena simultaneously, significantly affected not only the anatomy of the dog, but also its behavior and metabolism!

Despite such a close genetic relationship, the dog lost many behaviors characteristic of wild wolves, while evolving new abilities that opened the gate for him on the way to a very intimate relationship with a human. Dukowicz et al. (2015), the cognitive functions of dogs were significantly reduced in relation to wild wolves. Dog living with a human began to handle him as the main source of information, thus making its lives dependent on human.