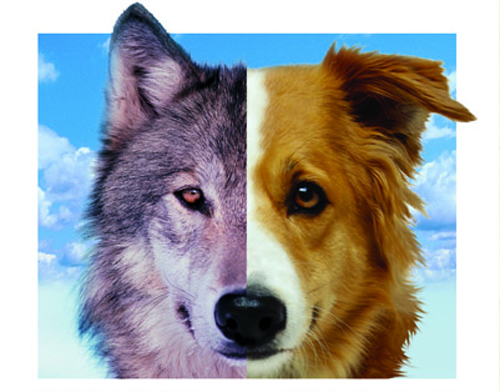 What is caused that the paths of a dog and a wolf have parted? The human settlements. A new ecological niche created about 14,000 years ago. A dog living in a new conditions needed to adapt anatomically, mentally and metabolically. I would like to present to you the latest scientific theories set on the process of domestication of the Canis lupus familiaris and to discuss the effects it brought to the closest species for human on Earth.

How long has the domestication been going on? 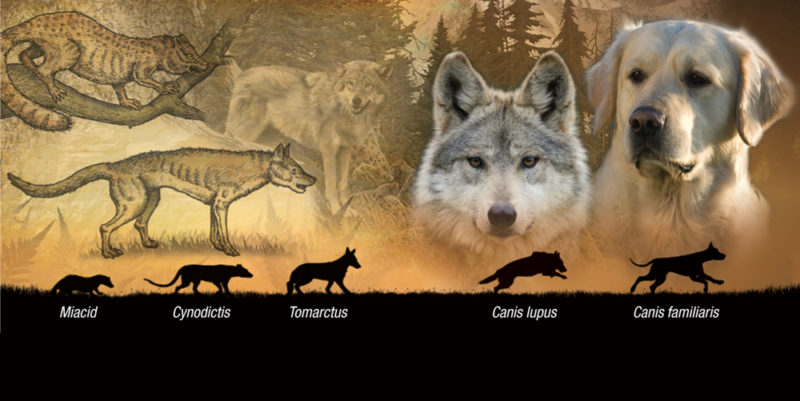 Probably many of you have been wondering sometimes, how long a dog have been exist as a separate species? I must admit that before I came to this subject from the scientific side (writing my graduation work), I met with very different numbers that were supposed to be the presumed dates of time “since a dog lives with a human”. In order to understand the essence of this long-lasting process, one should consider from when really the first wolves appeared on Earth, willing to change their current way of life – from wild predators to animals living in symbiosis with humans.

Archeology with its news is helpful here . The dates are shocking.

Archaeological excavations provide information about the fact that the wolf lived close to a man even 400,000 BC!

For example the remains of a wolf from Zhoukoudian in North China, dated to 300,000 BC or the remains found near the Lazaret cave in Nice,France – dated around 150,000 years BC and the remains of a wolf from Boxgrove in Kent, England, dated 400,000 years ago. (Clutton-Block J., 1995). All these individuals lived in an unusually close neighborhood of a human and this may be testified that the process of differentiation of the wolf into wild populations and populations living close to humans that is already beginning at that time.

Therefore a dog domestication is a process that probably it is lasts from 400,000 BC. !

Natural selection as a way of dog domestication 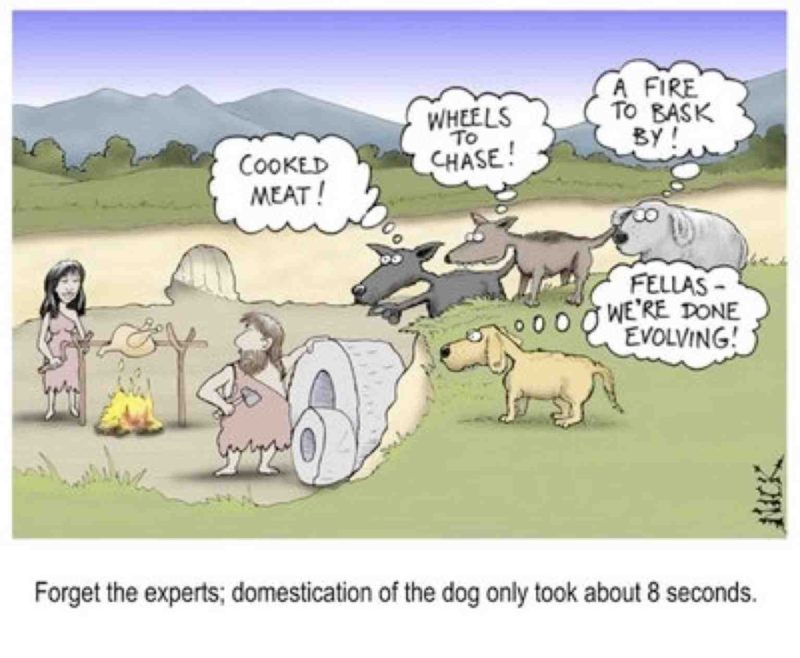 Since 400,000 years, the gray wolf has differentiated into populations that prefer wild life, avoiding people and populations feeding in the nearness of humans. 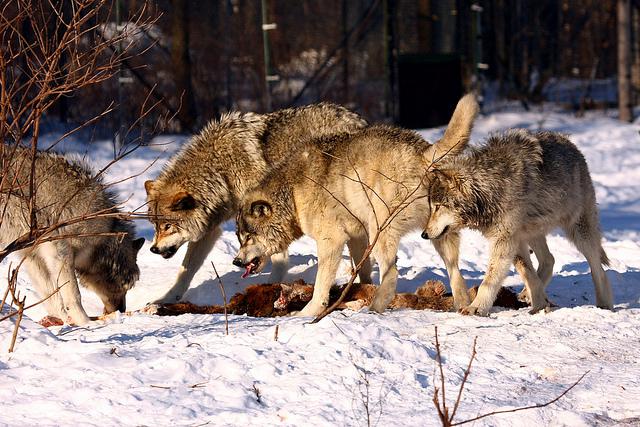 There are several theories regarding the process of domestication itself. The most popular of them is a model to assume the natural selection as a way of dog domestication (Coppinger, 2001). According to him, wolves had to profits from the closeness of human, eating leftovers from human meals.  On the other hand, people has benefited from the nearness of the wolf pack, which warned the nomads of the approaching threat and deterred other predators. In such wolf populations, natural selection preferred individuals less timid to humans, because such had better access to food leftovers by humans. 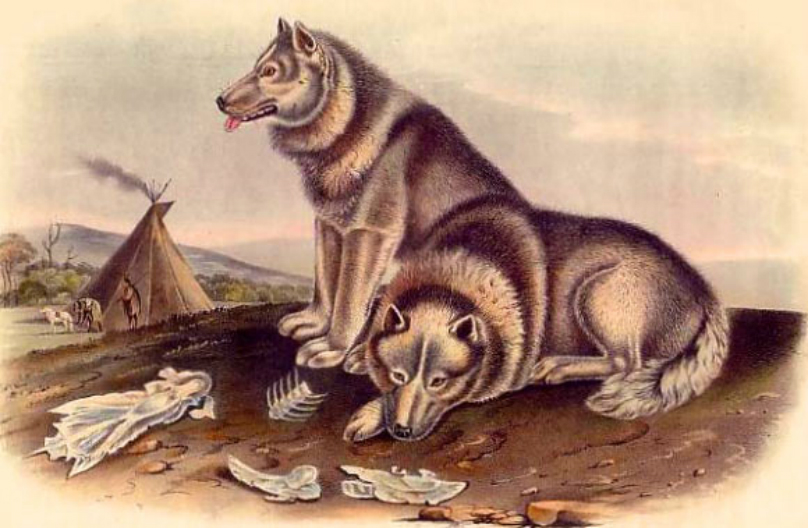 A Neolithic man is a farmer who subordinates a nature to himself. The settlements produced enough food for the population living in it, and on their outskirts they created garbage dumps that had not been eaten by people.Food leftovers found by ancient dog consisted mainly of inferior quality food, mainly of lower protein content and lower caloric density compared to the original wolf diet. Therefore, natural selection preferred smaller individuals (less muscular, with smaller teeth), because such had lower energy requirements. In addition, the selective pressure on the social hierarchy and the raw order in the herd decreased, because typical herd behavior began to be displaced by the semi-solitary behavior of scavengers.

According to Case (2010), this is how the first populations of tamed dogs were created, adapted to reproduce in human proximity and to feed on leftovers left by humans. In this way, from predators hunting in a well-matched pack, dogs began to lead a semi-solitary life as scavengers-commensals. Therefore, prey behaviors in all dogs are less pronounced than in their wild relatives.

According to this theory, about 14,000 years ago (the oldest excavations of the remains of a dog from Obberkassel in Germany are dated to 14,000 years BC) had been the final division into a wild wolves living far from human settlements and “rural dogs” living in close proximity to human. The socond one are considered the direct ancestors of modern dogs (Case, 2010).

A dog as a neotenic form of a wolf

14,000 years seems too short time for any canine to quickly modify its anatomical structure, psyche and adapt the metabolism to new environmental conditions. Even taking into account the very rapid change of generations in canine (relative to humans;) ). But when we realize that this process had shaping wolves for over 400,000 years, it’s stop to amaze us.

According to Case (2010) and her theory that a dog is a neotenic form of a wolf, adult dogs retain certain body-building characteristics typical of wolf’s juvenile age. Bradshaw (2012) explains also that this is a phenomenon in which the normal growth of certain parts of the body is accompanied by the stoppage of the growth of its other parts. As he says, in this way we obtain “miniaturized” individuals. 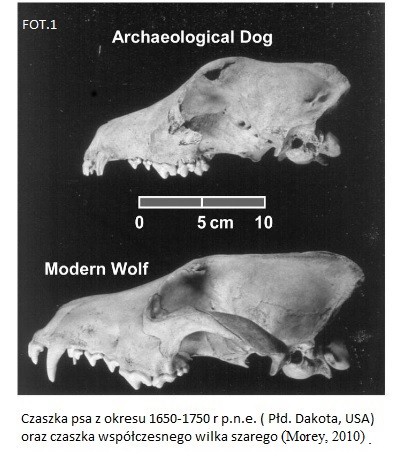 A wolf’s skull, dating from the last ice age, dated 10,000 years BC, found in Fairebanks, Alaska, was characterized by a short muzzle in relation to the construction of the skull of the wolves of the time, which indicates that the individual was a member of the tame wolf population (Clutton -Block J, ed. James Serpell, 1995).

Among domesticated animals, the following are usually observed: reduction of the size of the body, reduction in the size of the jaws, smaller number and size of teeth, shortening of limbs, less visible secondary sexual characteristics of males (Case, 2010). Even the biggest Bernardine has smaller teeth and less strength of grip than the average wolf.

In addition to size, the features associated with neoteny, with we can observe in some of the dog breeds are: drooping ears and curled tail, characteristic of wild wolves only for puppies. Neoteny is also affects the rate of physical development of individuals. In dogs, physical growth is delayed compared to the growth of their wild relatives (Case, 2010), although sexual maturity occurs earlier. This is probably related to the availability of food, and as we know, domesticated animals raised by man are fed regularly and completely. Dogs get sexual maturity at the age of about 6-9 months, while wolves at the age of about 2 years. In addition, a heat in female dogs occurs twice a year, and males are fertile throughout the year, while the she-wolf passes only one oestrus cycle, in
during the winter. The wolf male also produces sperm seasonally (Dukowicz et al., 2015).

It should also be remembered that together with genes encoding neotenic phenotypic changes, it is likely that the genes associated with the infantile behavior of dogs are also coupled. This would explain a greater need for contact with a guide (for a dog it’s a human), because for puppies there is a need for mother care, as well as frequent eye contact with a human in wild wolves (Miklósi, 2003) and so great possibilities of mental adaptacion to the variability of the environment. The submissive attitude of puppies and the manifestation of passive and active obedience are probably one of the most important behavioral features that have intensified in the domestic dog (Case, 2010).

Moreover, according to Miklósi (2003), the period of primary socialization in wolves is shorter than in dogs, and the symptoms of neophobia (fear of everything unknown) are much stronger, which is probably the reason why wild wolves, even those kept in captivity they are not able to establish so strong and closely relationship with a man that a dog can create.

The dog’s puppy prefers a human 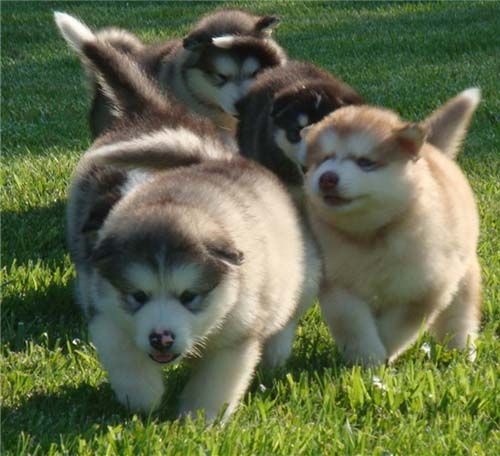 Research conducted by Harry and Marta Frank (1980, from Dukowicz et al., 2015), consisting of a comparative observation of a group of wolf puppies and a group of puppies of dogs (alaskan malamute), devoted to raising (from the 10th day of life) to wolf mother ( being the mother of wolf puppies), showed that wolf puppies preferred the presence of their own species, while puppies of alaskan malamute, having the choice of contact with the adopted wolf mother or with a human, more willingly approached people.

According to Bradshaw (2012, from Dukowicz et al., 2015), dogs – as one of the few social species, can be socialized both with individuals of their species and with humans.

An important element of changes in canine behavior associated with neoteny is also a greater desire to play in adult dogs compared to adult wolves, and vocalization and whimpering – which are used less often and with less diversity.